All Generations Shall Call Me Blessed

The Assumption of Mary into Heaven

I will greatly rejoice in the Lord,
and my soul shall be joyful in my God:
for he hath clothed me with the garments of salvation:
and with the robe of justice he hath covered me,
as a bridegroom decked with a crown,
and as a bride adorned with her jewels.
Isaiah 61, 10

At that time, I will bring you home,
at the time when I will gather you together;
yea, I will make you renowned and praised
among all the peoples of the earth,
when I restore your fortunes
before your eyes, says the Lord.
Zephaniah 3, 20

I will perpetuate your memory through all generations;
therefore the nations will praise you for ever and ever.
Psalm 45, 17

And Mary said:
My soul does magnify the Lord.
And my spirit rejoices in God my Saviour.
For he has regarded the lowliness of his handmaid;
behold from henceforth all generations shall call me blessed.
Because he that is mighty has done great things to me;
and holy is his name.
Luke 1, 46-49

Sacred Scripture often confirms what belongs to Catholic Tradition using words or expressions employed by the authors of the Biblical texts under the inspiration of the Holy Spirit. These help the Church in better understanding what God has intended to fully reveal to the faithful in matters of faith and morals, notwithstanding whether the authors themselves were aware of the Divine intention (sensus plenior). Sometimes the choice of words and phrases extends beyond the primary context of the matter as is the case with prophecies. Isaiah 7:14 is a prime example, which Matthew himself quotes in his gospel when bearing witness to Christ’s incarnation (Mt 1:23).

In her Canticle of Praise or Magnificat, Mary speaks prophetically when she proclaims: “Behold, from henceforth all generations shall call me blessed.” What non-Catholic Christians generally understand Mary means by being blessed (makaria) is only that she has been highly favored to be the mother of Jesus. In its primary signification, the prophecy has been realized. Unless Mary is the mother of the Lord in his humanity, by conceiving and giving birth to him, there is no reason for Christians to rejoice in Mary’s happiness for her sake because of this singular favor that has been granted to her by God. Yet we are still left with the prophecy’s secondary fulfillment which the evangelist alludes to in the following verse: “Because the Almighty has done great things to me, and holy is His name.” These great things or privileges Mary refers to with respect to her blessed state relate to her Divine Maternity and by this singular favor extend from it. 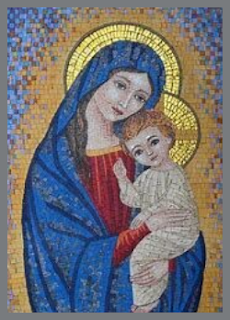 The original Greek word Luke uses for being pronounced blessed (makarizó / μακαρίζω) in the given context can be interpreted as meaning “to be pronounced blessed because of enjoying privileges that extend from God’s favor” that being the Divine Maternity. Thus the “great things” which God has done for Mary are blessings that rest on her being the Mother of God (Isa 7:14; Lk 1:35, 43). Future generations of all the Christian faithful shall not simply honor Mary for having been chosen from among all women to be the mother of Jesus, but they shall also rejoice with her for the special privileges she has received by being our Lord’s mother.

This Greek word for blessed is more than an honorary term. It also serves as a benediction that promotes goodness and well-being, which Mary particularly possesses because she is the Mother of the Divine Messiah. The word connotes how she personally stands in her relationship with God in the supernatural life of grace. All future generations shall acknowledge blessings that, by Mary’s maternal right, exclusively belong to her in the order of divine grace. These are in fact privileges that are closely tied to Mary’s association with her divine Son in his work of redemption, another important reason she was chosen to be his mother. Jesus was not “made of a woman” only to acquire his humanity from her (Gal 4:4; Lk 2:35). 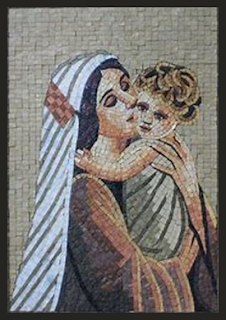 Protestant Biblical scholar Donald G. Dawes, in his exegesis of Luke 1:48, informs us that this same word for blessed (makaria) is “more than a polite honorific term” and was used in Patristic literature to characterize the martyrs. He states: “The highest expression of their blessedness was in the possibility of their ascension into heaven to dwell in the immediate presence of God” (The Assumption of the Blessed Virgin in Ecumenical Perspective). In other words, the martyrs aren’t simply blessed for having sacrificed their lives for Christ in faith no more than Mary is blessed only for having consented in faith to be the mother of the Lord. What is more important from an eschatological point of view is the final consummation of these acts of faith informed by charity and grace.

In a similar vein, when Jesus prophetically says, “Blessed (makaria) are the pure in heart, for they shall see God,” the highest expression of their being blessed is seeing God which results from their being pure in heart (Mt 5:8). Therefore, the gift of the Virgin Mary’s divine motherhood isn’t the highest expression of her being blessed or “happy” in the eyes of future generations of believers, though her blessed or happy state ultimately stems from her being the Mother of God and our Divine Messiah. 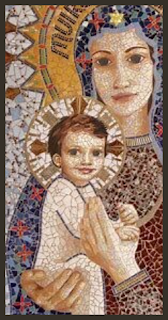 This prophetic verse in the Gospel of Luke is vital to the integrity of the Catholic dogmas of the Immaculate Conception and its corollary the glorious Assumption of the Blessed Virgin Mary, body and soul, into Heaven. Here we not only see Mary’s role in the Incarnation, which is an essential part of God’s plan in the economy of salvation, but also the final consummation of her salvation in a singular way because of her Divine call and moral participation in collaboration with God. What our Blessed Lady has been graced with is something all future generations shall especially rejoice in for her sake alone, since she alone has been granted this privilege for being the Mother of God and our co-Redemptrix or “Mother with the Redeemer” (Lk 2:34-35).

Mary shall not be pronounced blessed for simply having been faithful and died and gone to heaven along with all the other faithful departed. This is the hope of all Christians who die in a state of sanctifying grace. The redemption of their bodies on the Last Day is a divine truth that has been manifested and prefigured by the resurrection of Christ (1 Cor 15:20-23). Our Lady, on the other hand, is speaking prophetically about her, of a form of bodily redemption that applies exclusively to her because of the unique personal relationship she has with God in the hypostatic order of Christ’s incarnation.

Thus, the secondary fulfillment of Mary’s prophecy is eschatologically found in her Assumption. The highest expression of her being blessed is the glorious redemption of her body united with her immaculate soul in the Beatific Vision of God. All future generations shall pronounce Mary blessed for having received this pre-eminent favor that no other human being shall ever receive by God’s gratuitous grace, not only because she is the Mother of God, but also because of the other extended privilege or “great thing” God favored her with because of her Divine Motherhood – her Immaculate Conception and freedom from every stain of sin. 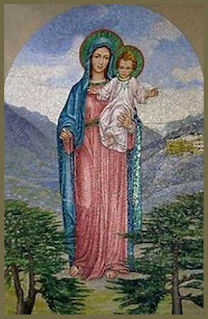 Finally, Luke 1:48 reads: “for behold from henceforth all generations shall call me blessed.” In the original Greek, the word “Behold” idŏu (ιδου) is a demonstrative particle, with no exact equivalent in the English language. Not unlike the equivalent Hebrew term hinnēh, the Greek word often serves to enliven a narrative by introducing something new or extraordinary. It is often used to emphasize the importance of something great. (See, for example, Lk 1:31; 2:10-11, KJB). For the faithful, there is nothing extraordinary in the fundamental Christian belief of a saint having died and gone to Heaven, at least not for them. What is extraordinary or unique, however, is the fact that the Blessed Virgin Mary has been gloriously assumed body and soul into Heaven because of her Divine Maternity and exemption from every stain of sin: original and personal. All the other departed saints in Heaven must wait until Christ returns in glory for the redemption of their bodies, while they remain in repose apart from the holy souls until the general Resurrection at the end of this age (Rev 20:4-5).

Hence, the connotations of the word “Behold” include a renewed and singular state of being for Mary rather than a change of circumstance in her life that occurs at the Annunciation. The word also carries with it the weight of a Divine ordinance and points to something of great prophetic importance which God wills to draw our attention to. Thus, all generations of Christians shall not pronounce Mary blessed simply because she was chosen to be the mother of their Lord Jesus. The faithful shall also take into consideration the “great things” God has done for her, namely those privileges which extend from that one supreme privilege. 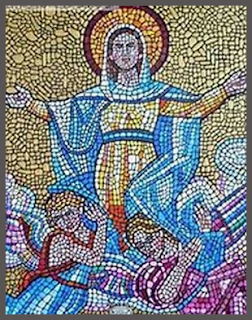 My beloved spoke and said to me,
“Arise, my darling, my beautiful one,
come with me.
See! The winter is past;
the rains are over and gone.”
Song of Solomon 2, 10-11